I always intend to be more active online. Well, today I finally started an account at Queeromance Ink, which included a place to put social media links on the author profile. Holy shit. I have a huge online presence… and it’s almost all terribly out of date.

So here I go again, dragging myself out of the shadows of anonymity I always retreat to, and making another effort to be active, and current, online.

And in case you’re wondering… the out of date places are:

Amazon (what ever happened to that author page I started ages ago, anyway?)

At least I’m active on deviantArt and Facebook. I’m not completely hopeless.

One of the best things about self-publishing is that I can change things I don’t like. And as my computer art skills improve, I’m going back and re-doing old, sucky covers. I finished a new one for With Honor today. And… re-read it, found a couple errors that snuck through my final edits, and repaired them. Also worked on improving my lousy blurb-writing skills.

Available through Smashwords and Amazon. Just don’t be surprised if the link takes you to an Amazon page with the crappy old blurb and title, because Amazon takes a few days sometimes to update changes. 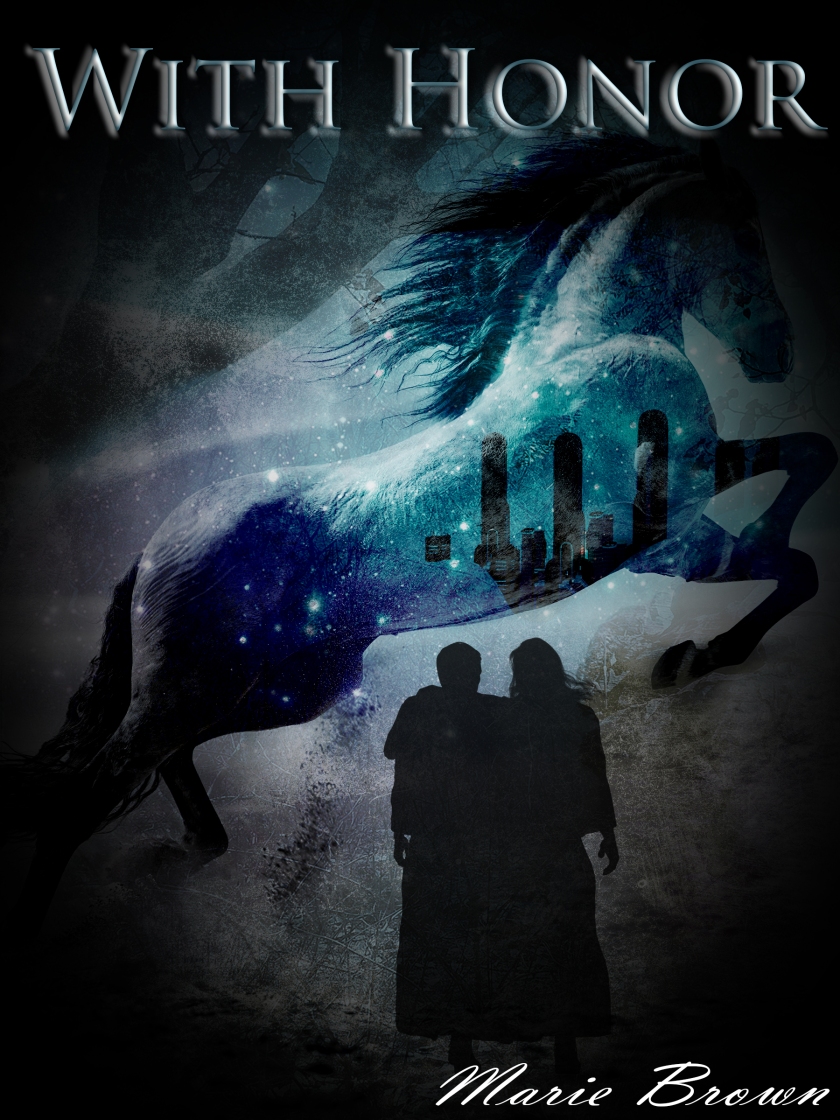 I have an announcement today, here on my barely-started, mostly empty blog. Anna Butler, an amazing writer whom I’ve known and admired forever, has a new release out today! Check it out, Anna’s writing never, ever disappoints. 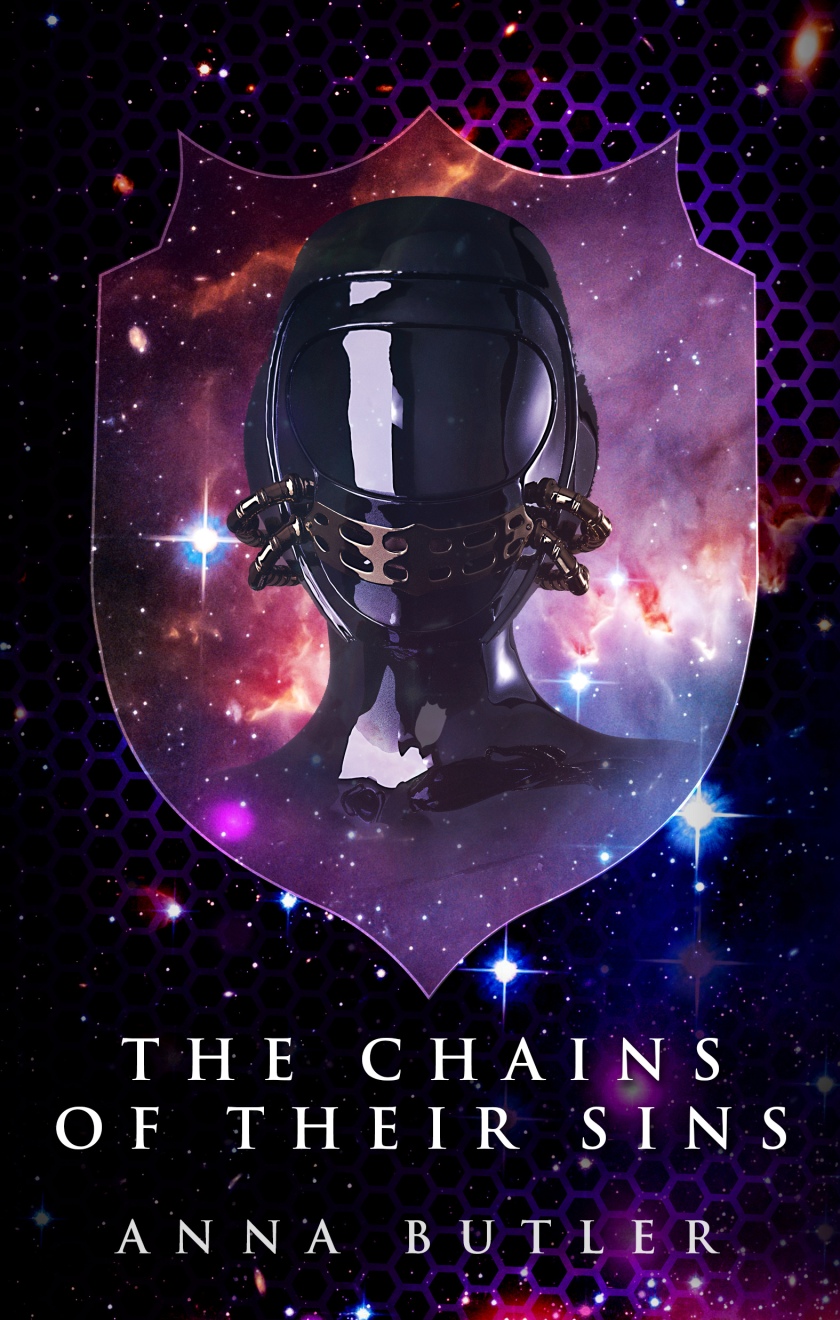 Taking Shield 04 : The Chains Of Their Sins

About the Taking Shield series

Earth’s a dead planet, dark for thousands of years; lost for so long no one even knows where the solar system is. Her last known colony, Albion, has grown to be regional galactic power in its own right. But its drive to expand and found colonies of its own has threatened an alien race, the Maess, against whom Albion is now fighting a last-ditch battle for survival in a war that’s dragged on for generations.

Taking Shield charts the missions and adventures of Shield Captain Bennet, scion of a prominent military family. Against the demands of his family’s ‘triple goddess’ of Duty, Honour and Service, is set Bennet’s relationships with lovers and family. When the series opens, Bennet is at odds with his long term partner, Joss, who wants him out of the military and back in an academic, archaeological career. He’s estranged from his father, Caeden, who is the commander of Fleet’s First Flotilla. Events of the first book, in which he is sent to his father’s ship to carry out an infiltration mission behind Maess lines, improve his relationship with Caeden, but bring with them the catalyst that will destroy the one with Joss: one Fleet Lieutenant Flynn, who, over the course of the series, develops into Bennet’s main love interest.

Over the Taking Shield story arc, Bennet will see the extremes to which humanity’s enemies, and his own people, will go to win the war. Some days he isn’t able to tell friend from foe. Some days he doubts everything, including himself, as he strives to ensure Albion’s victory. And some days he isn’t sure, any longer, what victory looks like.

About The Chains of Their Sins

Shield Captain Bennet arrives on the Gyrfalcon to take up his final year’s posting before returning to the Shield Regiment after his rotation out.

On the Gyrfalcon he faces up to the fallout from Makepeace—ethical, political and above all, personal. Will he be able to accept necessity: that knowing what the Maess are up to outweighs the humanitarian issues surrounding the prisoners he rescued from Makepeace? Can he ride out the political furore that follows the loss of the dreadnought Caliban? How will he cope with an entire year of serving under his father, Caeden? And worst of all, how in the name of every god in the Pantheon can he stand to see Flynn every single day, with the Fraternisation Regs standing between them and keeping them apart?

It will be an interesting year. Bennet can hardly wait for it to be over. Of course, things never really do go to plan…

Book Title: Chains of Their Sins

More Hornets were out of the tubes, racing to catch up; almost everyone, now. Bennet had the Patroklus squadron on visual, little points of light on his left, speeding towards him. He held the Starboard and Port wings in position, waiting for Patroklus to join him, listening to the continuous stream of inter-ship Comms that gave him the intel he needed on everyone’s position. Captain Sergei reported he was in position.

“Heads up, boys and girls,” Bennet said over the command line. “Bandits will be here in two minutes. Battlecode comm transmissions only.”

His gaze flickered to port-side most. His pilots were out there, tackling the outriders to the first wave of fighters. Nothing much to see. The fighters were drones, with no internal atmospheres to give even the briefest flash of light and heat when they were destroyed. If he saw a flash, it would be one of their own.

“All advance bandits accounted for,” Kyle said. “No survivors.”

“Yes!” The excitement in Kyle’s voice was unmistakable.

Bennet took a split-second to watch them get into position, the usual cold clenching around his guts, knowing they wouldn’t all come back. He had the fighters on visual now, a close-packed phalanx of ships, blotting out stars. There had to be more than a hundred of them, with a second wave of at least another hundred, maybe more, behind. A full complement of a battleship’s fighters all stacked up against the little Hornets.

Bennet opened his private comline to the Gyrfalcon. “Ten seconds, bridge. We’re going in.” He only half-heard Quist’s acknowledgement. He’d already keyed into the battle code comline. A deep breath. “All Attack Wings, intercept attackers and engage the enemy. Go!”

Five seconds later the front ranks of Hornets and fighters smacked right into each other.

Available for pre-order at Kobo.

Anna was a communications specialist for many years, working in various UK government departments on everything from marketing employment schemes to organizing conferences for 10,000 civil servants to running an internal TV service. These days, though, she is writing full time. She recently moved out of the ethnic and cultural melting pot of East London to the rather slower environs of a quiet village tucked deep in the Nottinghamshire countryside, where she lives with her husband and the Deputy Editor, aka Molly the cockerpoo.